Change is inevitable. Communicating about it is essential.

Following are three examples demonstrating effective change management communications at each of the three stages of change.

One thing is certain about organizational change: it is inevitable. It may come at you externally as something disrupts your market or upends the assumptions you hold. Or it may come not at you, but from you, as you devise your strategies for growth in an evolving business landscape. Whatever the circumstance, you have a real communication challenge ahead of you. Organizational change is rarely successful unless everyone is on board with it – receptive to change and willing to embrace it.

There’s no shortage of advice on this subject, and most of it is consistent across the board.

Having often helped large organizations conduct successful change management communications, we’ve seen how these guidelines, properly used, can help make transitions work successfully. We’ve worked with Corporate Communications, HR and change management specialists to tick off the finer points of execution, like making sure to take their organizations’ cultures and extended networks of relationships into account.

When change occurs, everyone is somewhere on the Change Curve.

As a basis for our approach, we lean toward a popular tool called the Change Curve. Adapted in different ways over time from a platform originally developed by psychiatrist Elisabeth Kubler-Ross, the Change Curve is often a good starting point for planning to successful change management communications.

This is particularly true when the change is negative, but even positive change can affect some employees negatively. For example, when new processes are implemented, they require moving out of comfort zones and changing habits developed over many years. And when a merger or acquisition occurs, some duplicated jobs are eliminated. The resulting stress is not limited to those who are let go; it can be stressful for the survivors, who may be losing work friends, may be unsure of their roles going forward, and may even be alarmed to glimpse the reality of employment “mortality”.

The model we use most often charts motivation and performance against time, which is broken down into three stages: Endings, Transitions and New Beginnings. 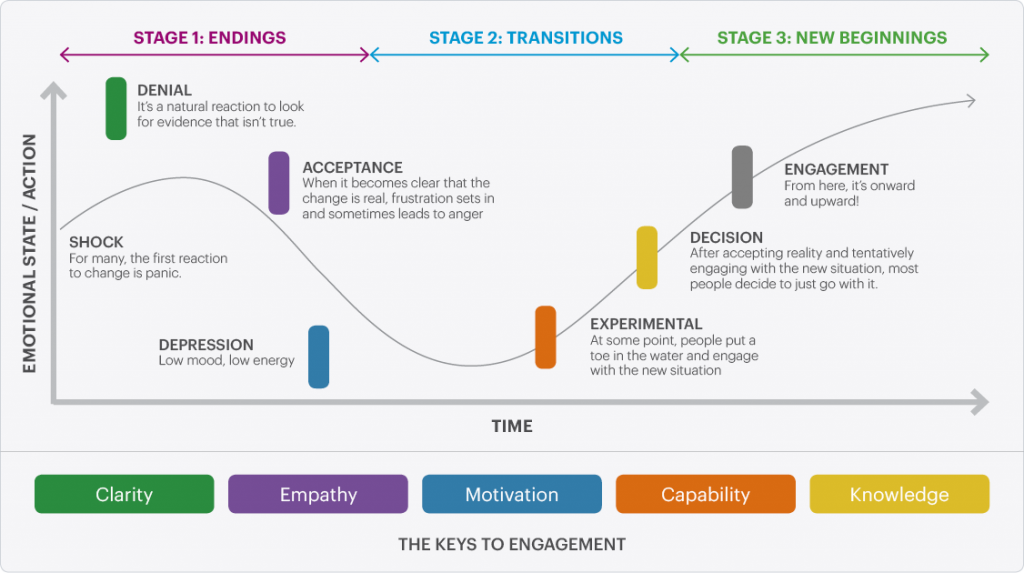 This variation of the Kubler-Ross Change Curve charts the phases of emotional state and action against time, in three stages. The legend suggests the goal of change communication at each stage. As the chart suggests, it is usually a linear process, and communication should be aligned with the audience’s receptivity as defined by the stage it’s in. Trying to push a step prematurely diminishes the likelihood of success.

When you meet people where they are, you can take them where they need to be.

What does great Change Communications look like? There’s no one formula, but we can say that it looks empathetic and personal. In a word, it looks human.

It also looks well-placed to be well-received. It comes from a place where people’s concerns are known, and their voices heard. It recognizes and addresses incorrect and incomplete information, rumors, and conjectures.

But for all the ways Change Communication is always the same, it is different in every case. Corporate cultures are different. Past histories are different. And whatever the change is, it is unique to each company.

To demonstrate, here are three examples from our own experience over the last twenty years.

A global manufacturer’s national sales meeting of about 300 hundred employees was taking place right after a reorganization. Recognizing the pervasive unease, the VP of Sales decided to forego the usual “pump ‘em up” opening. Instead, he arranged for the first two rows of chairs to be left empty, and he walked on the stage without the fanfare that would typically open a sales meeting.

He opened by telling the group that he understood how they felt. Sad. Uncertain. Scared. He talked with open, heartfelt sorrow about the leadership team’s distress over having to let good people go, and outlined what they had done to help those folks. (This happens to be a great company that takes very good care of its employees, and did so in this instance.)

In short, he validated their feelings. But then he helped them move on, explaining the three stages of the Change Curve, and assuring them that together, they would all reach Stages 2 and 3, and come out stronger in the end.

Example of Stage 2 – Transitions: The Affirmation of Purpose

In this instance, the company, a global services firm, had suffered a highly-publicized negative incident in one particular business unit, as the result of improper actions by a few individuals. The impact was felt not just in that unit, but by all employees in all business units. They valued the company name and were horrified to see it associated with wrongdoing. Many talented employees began looking for other jobs.

The leadership team took appropriate action to address the transgressions, but recognized that such a remedial action, while necessary and positive, would not be enough to restore its employees’ belief in the company. And so it committed to a plan to address the issue head-on, with substantive procedural changes and a communication campaign that began immediately and continued through the rollout of the new processes.

Recognizing that its employees were at the early stages of the Change Curve, the campaign was built from the point of view that the company’s employees defined themselves as professionals by the benefits they provide to their customers. This priceless understanding would prove to be the key to the company’s rebound. It began with a video that gave voice to employees’ concerns, expressed as a function of their self-esteem and professional pride.

Meanwhile, the company developed a system of fail-safe processes to help prevent improper actions, whether intentional or inadvertent. This is where the disciplines of great Change Communications was critical. The temptation is always there to launch with a stern warning that the process must be followed, and that there would be zero tolerance for failure to do so.

But the launch of that control system was heralded not as a punitive or restrictive measure, but rather as a mechanism for shared assurance for all employees that nothing would get in the way of their being able to provide valuable services to their customers. It was clear that compliance was mandatory, but the presentation turned what could have been perceived as a burden born of distrust into an expression of shared noble purpose – doing the right thing for every customer. It was assurance for all that the kinds of actions that caused the trouble could never happen again.

And it never has. Employees did embrace the control system, the expanding exodus of talent was stopped in its tracks, and the company was able to move on to regain its growth track.

Sometimes, the most important factor in cascading change through an organization is to emphasize that the change is not so much in the company’s strategy as in the way the company talks about the strategy.

This was the case in one engagement. The company had been through a rough patch, and a new leadership team had developed a strategy that began to turn it around. Then, based on insights gained from the initial rollout period, the team decided to make a few adjustments to accelerate growth, make operations more efficient and provide a better experience for customers.

One of those adjustments was to revise the company’s communications about its strategy. The existing strategy was described in relatively granular terms. Over the course of several months, a committee of leaders worked to distill the strategy down and to express it in a much more succinct way that would be instantly clear and memorable.

The internal communications team made a conscious decision not to hype or oversell the updated strategy. Employees, they found, were getting into a productive groove, and might be unsettled by a major overhaul. A lighter touch, they concluded, would be more credible.

So the launch was what could be called, “Change Management Light”. It celebrated the existing strategy and the employees around the world who had helped make it successful, and presented the updated strategy as a refresh of its presentation – simpler, more accessible and more memorable. In particular, the refined expression of the strategy’s objective and goal helped crystallize the company’s vision and made it easier for employees to engage in it.

The Lesson: Meet people where they are, and they’ll meet you where you are.

What lessons can we glean from these stories? In all three of these cases, the leaders met their employees with empathy and respect. They actively sought to understand and acknowledge what their employees were feeling. And where some might have adopted a command-and-control approach, these leaders chose a care-and-engage approach.

Want to learn more about the “Meet Them Where They Are” approach to Change Management Communications?